The parachain slots will be leased according to an unpermissioned candle auction, with several alterations related to improving security while operating on a blockchain. See Rationale for additional details.

The auction schedule for Kusama is available on the auctions page of the Kusama website. 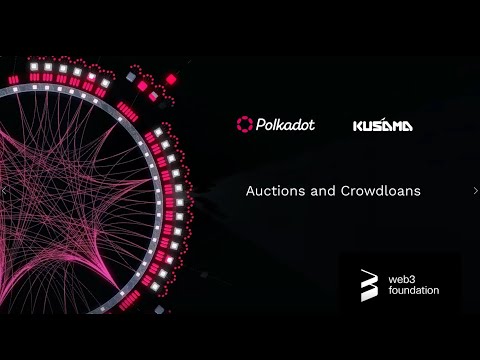 Mechanics of a Candle Auction​

Candle auctions are a variant of open auctions where bidders submit bids that are increasingly higher. The highest bidder at the conclusion of the auction is considered the winner.

Candle auctions were originally employed in the 16th century for the sale of ships. The name is derived from the system by which the auction length was determined. The phrase "inch of a candle" refers to the length of time required for a candle to burn down 1 inch. When the flame extinguishes and the candle goes out, the auction terminates and the standing bid at that point in time prevails the winner.

When candle auctions are used online, they require a random number to decide the moment of termination. Parachain slot auctions differ slightly from a normal candle auction in that they do not randomly terminate the auction. Instead, they run for an entire fixed duration and the winner is randomly chosen retroactively.

The candle auction on Kusama is split into two parts:

A parachain auction on Kusama lasts exactly one week from the start: 1 day and 18 hours for the starting period, days for the ending period (candle auction phase) and 6 hours for determining the auction winner.

Crowdloan contributions cannot be made during these six hours when the winning block for the auction is being determined on-chain.

More details on this are available in the Network Implementation section.

The following example will showcase the randomness mechanics of the candle auction for the ninth auction on Kusama. Keep in mind that the candle phase has a uniform termination profile and has an equal probability of ending at any given block, and the termination block cannot be predicted before or during the auction.

The open and transparent nature of blockchain systems opens attack vectors that are non-existent in traditional auction formats. Normal open auctions in particular can be vulnerable to auction sniping when implemented over the internet or on a blockchain.

Auction sniping takes place when the end of an auction is known and bidders are hesitant to bid their true price early, in hopes of paying less than they actually value the item.

For example, Alice may value an item at auction for 30 USD. She submits an initial bid of 10 USD in hopes of acquiring the items at a lower price. Alice's strategy is to place incrementally higher bids until her true value of 30 USD is exceeded. Another bidder Eve values the same item at 11 USD. Eve's strategy is to watch the auction and submit a bid of 11 USD at the last second. Alice will have no time to respond to this bid before the close of the auction and will lose the item. The auction mechanism is sub-optimal because it has not discovered the true price of the item and the item has not gone to the actor who valued it the most.

On blockchains this problem may be even worse, since it potentially gives the producer of the block an opportunity to snipe any auction at the last concluding block by adding it themselves while ignoring other bids. There is also the possibility of a malicious bidder or a block producer trying to grief honest bidders by sniping auctions.

For this reason, Vickrey auctions, a type of sealed-bid auction where bids are hidden and only revealed at a later phase, have emerged as a well-regarded mechanic. For example, this mechanism is leveraged to auction human readable names on the ENS. The Candle auction is another solution that does not require a two-step commit and reveal schemes (a main component of Vickrey auctions), which allows smart contracts to participate.

Candle auctions allow everyone to always know the states of the bid, but they do not reveal when the auction has officially ended. This helps to ensure that bidders are willing to make their true bids early. Otherwise, they may find themselves in a situation where the auction was determined to have ended before having an opportunity to bid.

Kusama will use a random beacon based on the Verifiable Random Function (VRF). The VRF will provide the base of the randomness, which will retroactively determine the end-time of the auction.

This means that parachains do not need to always inhabit the same slot, however they always must maintain a slot to remain a parachain.

Parachains or parachain teams, bid in the auction by specifying the slot range that they want to lease and the number of tokens they are willing to reserve. Bidders can be either ordinary accounts, or use the crowdloan functionality to source tokens from the community.

Bidders will submit a configuration of bids specifying the token amount they are willing to bond and for which periods. The slot ranges may be any of the periods 1 - n, where n is the number of periods available for a slot. (n= for Kusama)

If you bond tokens with a parachain slot, you cannot stake with those tokens. In this way,

you pay for the parachain slot by forfeiting the opportunity to earn staking rewards.

A bidder configuration for a single bidder may look like the following pseudocode example:

The important concept to understand from this example is that bidders may submit different configurations at different prices (bond_amount). However, only one of these bids would be eligible to win exclusive of the others.

The winner selection algorithm will pick bids that may be non-overlapping in order to maximize the amount of tokens held over the entire lease duration of the parachain slot. This means that the highest bidder for any given slot lease period might not always win (see the example below).

A random number, which is based on the VRF used by Kusama, is determined at each block. Additionally, each auction will have a threshold that starts at 0 and increases to 1. The random number produced by the VRF is examined next to the threshold to determine if that block is the end of the auction within the so-called ending period. Additionally, the VRF will pick a block from the last epoch to access the state of bids which can help aid in mitigating some types of attacks from malicious validators.

There is one parachain slot available.

Let's calculate each bidder's valuation according to the algorithm. We do this by multiplying the bond amount by the number of periods in the specified range of the bid.

Although Dave had the highest bid in accordance to token amount per period, when we do the calculations we see that since he only bid for a range of 4, he would need to share the slot with Emily who bid much less. Together Dave and Emily's bids only equals a valuation of 560. Charlie's valuation for the entire range is 600. Therefore Charlie is awarded the complete range of the parachain slot.

Before the slot lease expires, parachains have to bid and win another auction for continuity of the lease. To avoid any downtime in connectivity and minimize the risk of losing a subsequent auction, parachain teams need to plan ahead to bid for the lease extension before their current lease period ends. Explained in the section above, each auction lets you bid for 8 LPs (Lease Periods) which enables two scenarios for the parachain's lease extension.

Both slots have at least one LP in common. When the old slot transitions to their last LP, the parachain can swap the slots. This can be done via on-chain governance. The swap call is available in the registrar pallet. 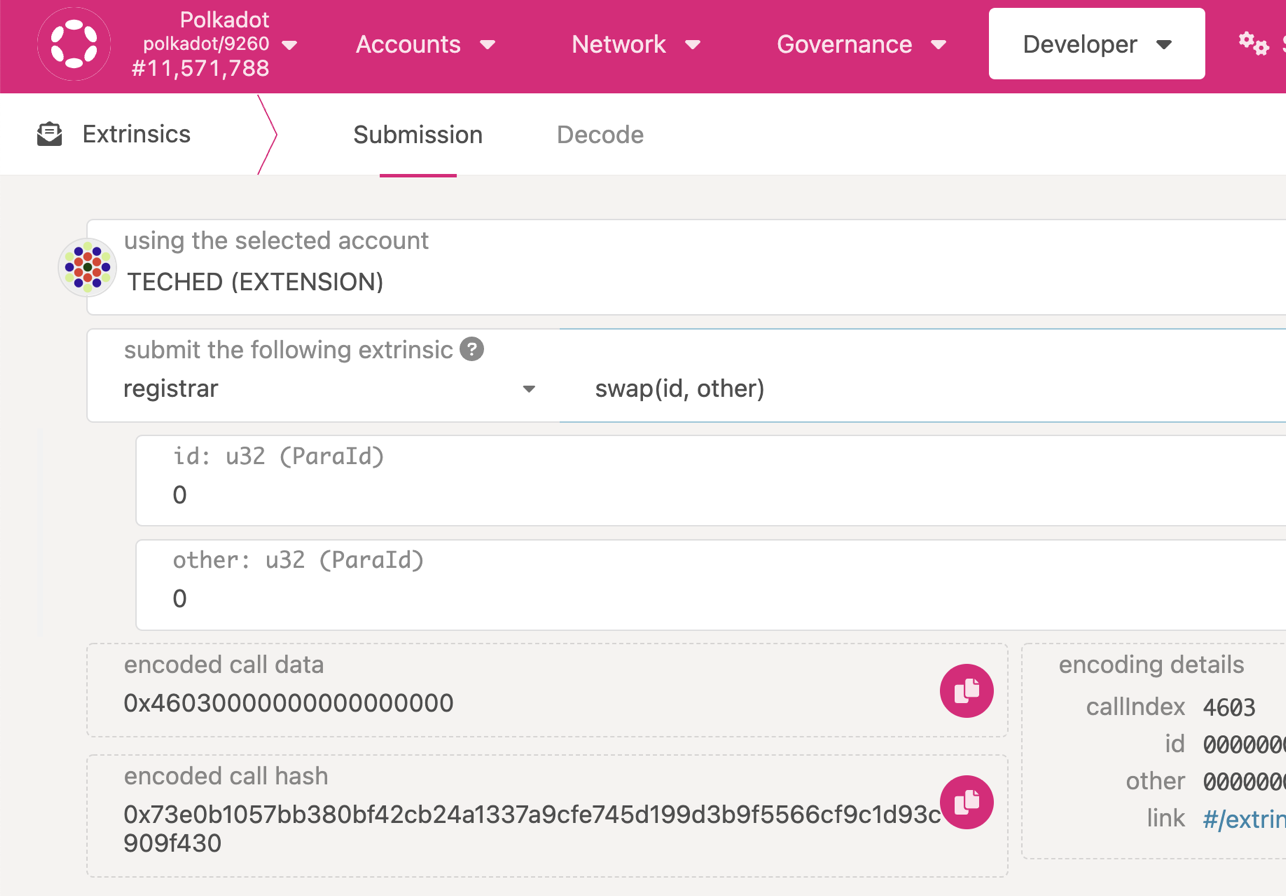 Any two parachains can swap their slots via XCM

The slot swap via XCM requires two live parachains to send an XCM message to the relay chain to approve the swap. A parachain team with access to two overlapping slots can start a shell parachain on the new slot and swap it with their actual parachain on the old slot, thus ensuring continuity of the lease.

Acquire a slot where the first LP starts right after the end of the last LP of the current slot. In this case, the parachain can bid directly with their current paraId, and it will be automatically extended without the need of swapping. This method has the advantage of not having superfluous LP's on different slots owned by the same team, however it has the disadvantage of losing flexibility on when to win a new slot: if the team does not win the exact slot, then it will suffer some downtime until it wins a new slot.

Why doesn't everyone bid for the max length?​

For the duration of the slot, the tokens used for bidding in the auction are locked up. This suggests there is an opportunity cost associated with bidding, as the tokens could have been leveraged for something else.

How does this mechanism help ensure parachain diversity?​

The method for dividing the parachain slots into intervals was partly inspired by the desire to allow for a greater amount of parachain diversity, while preventing particularly large and well-funded parachains from hoarding slots. By making each period a 6-week duration but the overall slot a 1-year duration, the mechanism can cope with well-funded parachains, ensuring they secure a slot at the end of their lease, while gradually allowing other parachains to enter the ecosystem to occupy the durations that are not filled. For example, if a large, well-funded parachain has already acquired a slot for range 1 - 8, they would be very interested in getting the next slot that would open for 2 - 9. Under this mechanism, that parachain could acquire just period 9 (since that is the only one required) and allow the 2 - 8 range of the second parachain slot to be occupied by another party.

Why is randomness difficult on blockchains?​

Generating a random number trustlessly on a transparent and open network opens up the possibility for bad actors to attempt to alter or manipulate the randomness. There have been a few solutions that have been proposed, including hash-onions like RANDAO and verifiable random functions (VRFs). The latter is what Kusama uses as a base for its randomness.

Are there other ways of acquiring a slot besides the candle auction?​

Aa parachain slot can also be acquired through a secondary market where a 3rd party has already won a parachain slot and has the ability to resell the slot along with the associated deposit of tokens that are locked up to another buyer. This would allow the seller to get liquid tokens in exchange for the parachain slot and the buyer to acquire the slot as well as the deposited tokens.

How are auctions scheduled?​

The parachain slot auctions are scheduled through the governance. At least 2/3 of the Council can initiate an auction, however, Root origin (via referendum) is needed to cancel an auction. Here is a proposal that gives a glimpse of what goes into planning auctions schedule - Proposed Polkadot Auction Schedule 2022.