Skip to main content
Nomination Pools are live on Polkadot!

Nomination pools are a new feature for Polkadot’s staking system that allows users to pool their DOT tokens together on-chain to nominate validators and receive rewards, significantly improving the system’s scalability. Now, anyone with as little as 1 DOT can receive rewards for staking natively on Polkadot.

Have questions on Nomination Pools?

Please join the Polkadot Discord for asking general questions about Nomination Pools. If you are a developer, please join our nomination pools support channel. 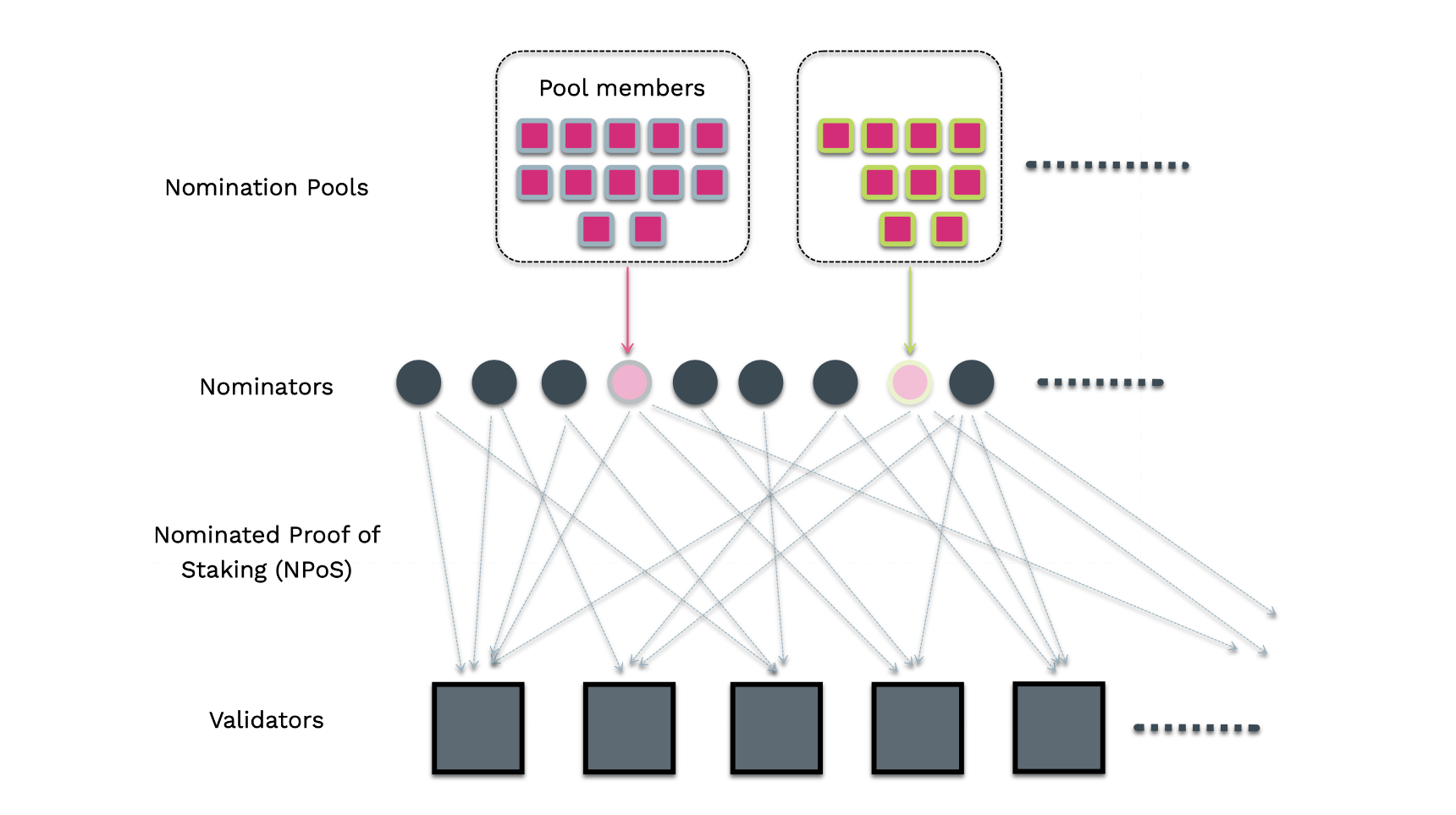 Nomination pools are one of the key features from the roadmap of staking improvements on Kusama. They are designed to permissionlessly allow members to pool their funds together and act as a single nominator account.

Due to the current runtime constraints, Kusama can only handle nominators comfortably in the electing set. As one of the objectives of the NPoS algorithm is to maximize the overall stake on the network, it can be inferred that the staking system on Kusama favors nominators with a larger stake. Only the nominator accounts which back the validators in the active set are eligible for receiving staking rewards. This leaves out nomination intents from the accounts with lower token balance than the min-active nomination and places them in a waiting queue to enter electing set. Nomination pools will be handy to the members who would like to participate in the staking system with a stake much lower than the dynamic min-active nomination threshold on the network. All operations are constant space and time complexity relative to the number of members, eliminating any theoretical upper bound on the quantity of members the system can handle and thus scaling the number of accounts that can participate and earn rewards in the staking system on Kusama. In summary, each nomination pool is viewed as a single nominator from the NPoS system point of view.

Why aren't the members in the nomination pools called delegators?

The earnings of the pool are split pro rata to a member's stake in the bonded pool (and thus the staking rewards for members will be the same as if they were a nominator). Importantly, slashes are also applied proportionally to members who may have been actively bonded.

A member delegates funds to a pool by transferring some amount to the pool’s bonded account with the join extrinsic. The pool then increases its bond with the new funds. A member is afforded the ability to bond additional funds, or re-stake rewards as long as they are already actively bonded. Note that a member may only belong to one pool at a time.

The current minimum bond to join a pool is .

The funds nominated to a pool will not be visible in the member's account balance on Polkadot JS Apps UI. This is because the member funds are transferred from their account to the pool's account. This pool account is not accessible by anyone (including the pool root or depositor) and only the pool's internal logic can access the account.

Check the "How to join a pool" section in this support article for guidelines.

At any point in time after joining the pool, a member can start the process of exiting by unbonding. unbond will unbond part or all of the member's funds. After unbond has been called and the unbonding duration has passed ( eras which correspond to days on Kusama). A member may withdraw their funds with withdrawUnbonded. Withdrawing effectively ends a member's relationship with their pool, allowing them to join a different pool if desired. Check the "Withdraw unbonded funds" section in this support article for guidelines.

When there is a change in the bonded balance, the accumulated rewards in the pool thus far are automatically withdrawn to the account. The rewards are then accrued based on the updated bonded balance.

The depositor calls the create extrinsic, setting the administrative roles and transferring some funds to the pool in order to add themselves as the first member. As stated above, the depositor must always be a member as long as the pool exists; they will be the last member to leave, ensuring they always have some skin in the game. Significant stake from the depositor is always a good indicator for the pool's credibility.

The current minimum bond to create a pool is .

The UI automatically assigns ID to the pool and allows for entering the name of the pools as well as the deposit to be bonded.

When creating a pool using Polkadot JS Apps UI, all the roles are mapped to the Depositor account by default. If any of these roles need to be assigned to a different account, create the pool using create extrinsic available on Developer > Extrinsics > nominationPools on Polkadot JS Apps UI.

The nominator can update the pool’s validator selection. On Polkadot JS Apps UI, navigate to Network > Staking > Accounts page and click on Pooled button.If you have any pooled accounts with the role of nominator, you would notice the option to set nominees. Select the validators to nominate like you would normally using a nominator account.

The state-toggler can update the pool’s state to blocked through setState extrinsic and then kick members by calling unbond and withdrawUnbonded. (The state can also be toggled back to open).

A pool can be pushed into the “destroying” state via one of:

If a pool’s underlying nomination account is slashed by the staking system, then the slash is distributed evenly across the bonded pool and the unbonding pools from slash era+1 through the slash apply era. Thus, any member who either a) was unbonding or b) was actively bonded in the aforementioned range of eras will be affected by the slash. In other words, a member who may have been actively bonded during the offence is slashed pro rata based on its stake relative to the total slash amount.

Unbonding pools need to be slashed to ensure all nominators who were in the bonded pool while it was backing a validator that committed an offence are punished. Without these measures a nominator could unbond right after a validator equivocated with no consequences.

This strategy is unfair to members who joined after the slash, because they get slashed as well, but spares members who unbond. The latter is much more important for security: if a pool's validators are attacking the network, their members need to unbond fast! Avoiding additional slashes gives them an incentive to do that if validators get repeatedly slashed.