Kusama allows parachains to source tokens for their parachain bids in a decentralised crowdloan.

Contributing to a crowdloan

If you are here for guidance on how to contribute for a crowdloan, watch the video below or read this support article on crowdloans. 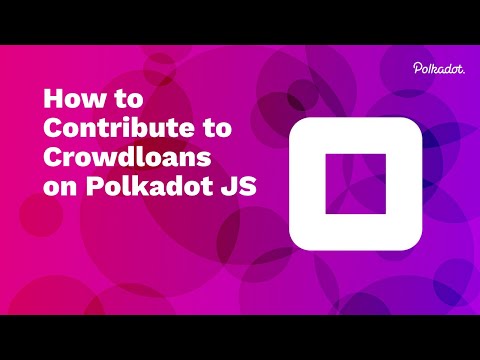 For information on how to participate in the crowdloan and parachain auction testing on Rococo, please see the Rococo content

It is important to recognize that starting a crowdloan campaign is optional for participating in a parachain slot auction. The parachain slot auction can also be won directly through self-funding without community involvement. To reiterate, crowdloan campaigns are just one of the means to win auctions, which allow the community to participate in a trustless and permissionless way.

Let's look at a scenario where Project A is hoping to gain a parachain slot on Kusama, but they don't have enough tokens to bid directly to win the parachain auction. Project A could benefit from starting a new crowdloan campaign to help secure a parachian slot. Crowdloans are trustless and are supported natively on Kusama, allowing the community to bond their tokens on Project A's behalf for the entire parachain lease duration. This will allow Project A to compete with projects that may have access to greater capital, given the project has sufficient community support. In return, the community contributors are rewarded by the projects that win the parachain slot, which would typically compensate for the opportunity cost of bonding their tokens for the lease duration.

On the other hand, let's say Project B, which is more established and has access to capital, is hoping to secure a parachain slot through self-funding. Project B is not relying on any community funding (at least via the crowdloan mechanism), so they will have to determine how much funding they can allocate towards winning a slot.

Project B is in full control of how much they are ultimately willing to contribute towards their goal of gaining a parachain slot. Project B need not work on coming up with a rewards model for community contributors like Project A. In contrast, crowdloan campaigns are beneficial for projects that have access to limited capital but have strong community support. They are also beneficial for projects that are able to successfully bid to win the auction with self-funding, but are looking for a mechanism to bootstrap their community and get noticed by the key actors in the ecosystem.

Anyone who has registered a parachain can create a new crowdloan campaign for a slot by depositing a specified number of tokens. A campaign is configured as a range of slots (i.e. the duration of the parachain will bid for), a cap, and a duration. The duration can last over several auctions as long as the range of slots matches those of the auction (i.e. the first lease period of the crowdloan is the same or bigger than that of the auction). This means that a team will not need to restart the campaign just because they do not secure a slot on their first attempt.

In order to create a new crowdloan campaign, your account must have 10 KSM transferrable which will be reserved for the duration of the crowdloan

The minimum balance for contributions for a crowdloan campaign is currently set to . This is in an attempt to make crowdloans as accessible as possible while maintaining a balance to justify the use of the network's resources.

Do not send Crowdloan contributions directly to the Parachain address

All crowdloan contributions are handled by the Crowdloan module’s logic where a campaign is identified by an index, not by address. **Never transfer tokens to an address in support of a campaign.

Contributing to a crowdloan through Polkadot JS Apps (which uses crowdloan.contribute extrinsic) guarantees that you receive your tokens after the campaign ends. If you intend to make contributions through other websites and custodial service providers like central exchanges, review their terms and conditions thoroughly and assess the risks associated.

Note: When the lease periods won by the crowdloan have finished, or the crowdloan has ended without winning a slot, anyone can trigger the refund of crowdloan contributions back to their original owners. This can be done through the permissionless crowdloan.refund extrinsic available on Polkadot JS Apps > Developer > Extrinsics page, by specifying the parachain ID. This extrinsic may need to be issued multiple times, if the list of contributors is too long. All contributions must be returned before the crowdloan is entirely deleted from the system.

Here is an example of the crowdloans in play during the very first Kusama auction.